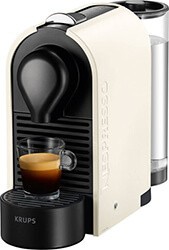 The U-series of machines offers a very solid standard of home based coffee machines from Nespresso, and the combination of affordability and simplicity make them the most popular range. The U-Milk in particular offers a great priced alternative to other machines such as the Lattissima.

Over time, the U-series coffee machines from Nespresso have been rolled into the Essenza range, which offer the same level of good, consistent Nespresso coffee albeit without a steam wand. Links to the Essenza range can be found below, but if you are interested in also being able to froth milk, we also highly recommend the Lattissima range.

The U series of coffee machines by Nespresso can be somewhat confusing to follow, because there are three different types named slightly differently. Most stores don’t tend to differentiate between them, so in short, they are as follows:

Please note that the U, U Milk and U Mat are also sometimes called U&Me, U&Milk and U&Mat. However, once you understand the differences between these types of machines as above, it should be easy to work out which is which and avoid any confusion. 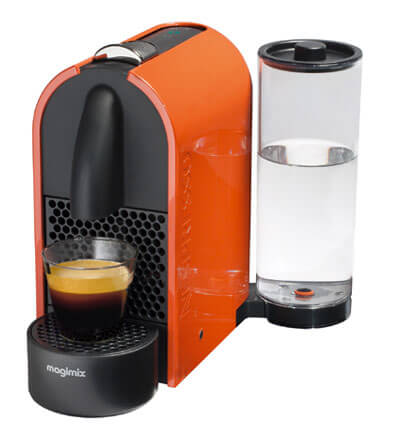 The regular U machine comes in size 11.5 x 25.1 x 36 cm, or roughly 4.6 x 9.9 x 14.2 inches. The goals of the U range are to offer simplicity while keeping the design of their machines modular. As a result, they tend to be on the cheaper end of Nespresso coffee machines while still offering pretty good quality, and are amongst the most popular for people to buy for home use.

Officially, marketing for the U-series is named “Tactile, Intuitive and Adaptable”. 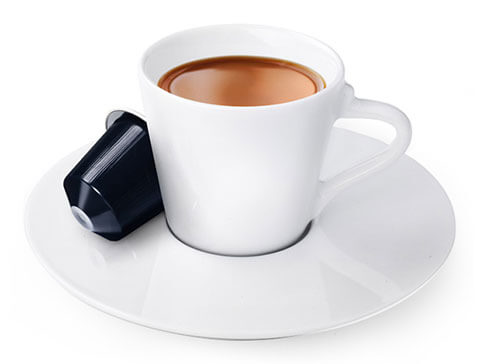 The Difference Between an Espresso, Ristretto and a Lungo

For anyone unfamiliar with the terminology, while the definition of these can vary depending on where you are it is generally accepted that a lungo is a ‘stretched’ version of an espresso with twice the water. This is not to be confused with any coffee such as an Americano where water is added afterwards, however! All of the water in an espresso lungo is brewed and not added afterwards.

On the other end of the scale, a ristretto is typically a condensed version of an espresso using less water.

There are no physical differences in terms of mechanics when it comes to comparing the U machine to the U-Mat machine, but it is worth noting that if you’re a fan of a nice matte finish or just want your coffee maker to be more stylistic in general, the Nespresso U-Mat machines should seriously be a consideration.

The matte grey and red finishes, which were the first two releases for this range, both look fantastic, but it will likely depend on the room you keep them in and your style to choose a colour that’s right for you.

If you enjoy having a basic but good machine around the house and would also like the option to create the odd milk-based coffee, you may be better suited to the Nespresso U-Milk machine.

It comes with one of Nespresso’s own Aeroccinos, an addition to the side of the machine that allows for consistent milk frothing and foam making.

This is great for two reasons: the first is the obvious about not having to try and remember if you switched the machine off, but the second is great news for people on-the-go who can forget about this entirely, since after the 25-second brew temperature heating time of the water it also shuts itself off if you need to rush out the door.

Nespresso also sell a couple of neat accessories for U-machines via the Nespresso Club. The first, which we love, is the U-Magnet attachment. Using magnets to attach to the machine, it creates a nice holder for spoons, sugar etc. next to your coffee maker. This is especially useful if it’s being used in an environment with several people drinking coffee!

The second is slightly more gimmicky but also quite cool for having your machine on-the-go should you need to take it somewhere – The U-Carrier bag also comes with a magnetic catch so that while on the move your machine is able to stay in one place.

In short, the U series of machines offers a very solid standard of home based coffee machines from Nespresso, and the combination of affordability and simplicity make them the most popular range. The U-Milk in particular offers a great priced alternative to other machines such as the Lattissima.

That said, for extreme coffee aficionados we would recommend some of the other ranges depending on your taste – the Lattissima machine for milk-based lovers and the CitiZ machine for pure espresso (although only by a whisker). For an affordable all rounder, however, the U-series is a “can’t go wrong” option.